One of the conversations that I have picked up on recently in the Friends of Russia Dock Woodland Discussion Group is the issue of rubbish management in the Woodland over the weekend. One post suggested that the problem with litter was mainly due to the fact that the bins were full and people who would have disposed of their rubbish responsibly were leaving their litter tied up in bags at the bases of the bins which was then scattered by foxes during the night.

My tour of the RDW on Sunday suggests that this was very much the case - the bins were all full to overflowing and were surrounded by neatly tied bags of litter. This was already drifting and it was easy to see that this could be torn apart by the foxes that live there during the night. There was no litter visible anywhere else. 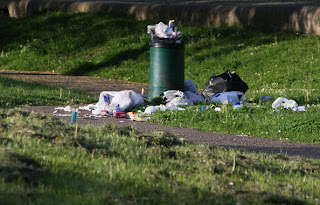 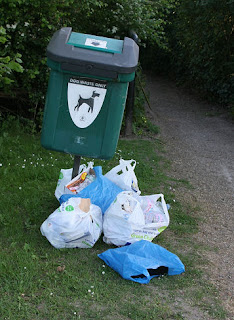